Meals Ready to Eat  (MREs)
The military developed Meals Ready to Eat as a way to provide a convenient and nutritious meal to its soldiers anytime, anyplace, and under any circumstances. MREs do not need to be rehydrated or heated thus making them an ideal option in an emergency situation. Throughout the years, the food choices have grown - there are now beef, pork, vegetarian, and pasta options. Dessert is even included. (Personally I love the chocolate chip cookies or the Tootsie Rolls that are included.)
MREs have a 5-10 year shelf life so not only are they an ideal food source for the troops, they are also used by many government and law enforcement agencies as well as disaster relief organizations. Most recently they were distributed in Puerto Rico after its devastating storm.
MREs should be part of your "Go Bag" - it takes up little space and does not need refrigeration.
Bon Appetit.   MRE's SECTION
More info from Wiki:

The Meal, Ready-to-Eat – commonly known as the MRE – is a self-contained, individual field ration in lightweight packaging bought by the United States Department of Defense for its service members for use in combat or other field conditions where organized food facilities are not available. While MREs should be kept cool, they do not need to be refrigerated. MREs replaced the canned MCI, or Meal, Combat, Individual rations, in 1981,[1] and is the intended successor to the lighter LRP ration developed by the United States Army for Special Forces and Ranger patrol units in Vietnam. MREs have also been distributed to civilians during natural disasters.[2]

Resolution, during the, consisted of enough food to feed a man for one day, mostly,, and.During the, the U.S. military moved toward canned goods. Later, self-contained kits were issued as a whole ration and contained canned meat, bread, coffee, sugar and salt. During the, canned meats were replaced with lightweight preserved meats (salted or dried) to save weight and allow more rations to be carried by soldiers carrying their supplies on foot. At the beginning of, a number of new field rations were introduced, including theand the. However, cost-cutting measures byofficials during the latter part of World War II and theagain saw the predominance of heavy cannedissued to troops, regardless of operating environment or mission.During WWII, over 100 million cans ofwere sent to the Pacific.The use of canned wet rations continued through the, with the improved.Background

The first U.S. soldier ration established by a Congressional Resolution, during the Revolutionary War, consisted of enough food to feed a man for one day, mostly beef, peas, and rice.[citation needed] During the Civil War, the U.S. military moved toward canned goods. Later, self-contained kits were issued as a whole ration and contained canned meat, bread, coffee, sugar and salt. During the First World War, canned meats were replaced with lightweight preserved meats (salted or dried) to save weight and allow more rations to be carried by soldiers carrying their supplies on foot. At the beginning of World War II, a number of new field rations were introduced, including the Mountain ration and the Jungle ration. However, cost-cutting measures by Quartermaster Command officials during the latter part of World War II and the Korean War again saw the predominance of heavy canned C rations issued to troops, regardless of operating environment or mission.[3] During WWII, over 100 million cans of Spam were sent to the Pacific.[4] The use of canned wet rations continued through the Vietnam War, with the improved MCI field ration. 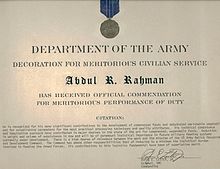 After repeated experiences with providing prepared rations to soldiers dating from before World War II, Pentagon officials ultimately realized that simply providing a nutritionally balanced meal in the field was not adequate. Service members in various geographic regions and combat situations often required different subsets of ingredients for food to be considered palatable over long periods. Moreover, catering to individual tastes and preferences would encourage service members to actually consume the whole ration and its nutrition. Most importantly, the use of specialized forces in extreme environments and the necessity of carrying increasingly heavy field loads while on foot during extended missions required significantly lighter alternatives to standard canned wet rations.

In 1963, the Department of Defense began developing the "Meal, Ready to Eat", a ration that would rely on modern food preparation and packaging technology to create a lighter replacement for the canned Meal, Combat, Individual ration. In 1966, this led to the Long Range Patrol, or LRP ration, a dehydrated meal stored in a waterproof canvas pouch. However, just as with the Jungle ration, its expense compared to canned wet rations, as well as the costs of stocking and storing a specialized field ration, led to its limited usage and repeated attempts at discontinuance by Quartermaster Command officials.[3]

Early MRE prototypes that involved freeze-dried and dehydrated foods were developed under Dr. Abdul Rahman, who later received the Meritorious Civilian Service Award for his work.[5] However, further work was needed to develop a ration that did not require re-hydration (thus not requiring additional preparation time and water). Further effort, led by Dr. Rauno A. Lampi, Chief of Food Systems Equipment Division at the Natick Soldier Research, Development and Engineering Center, concentrated on the refinement of the retort pouch to contain a wet ration with a three-to-ten year shelf life that could be easily shipped, carried in the field, opened and consumed straight out of the package if necessary with no further heat or water. The resulting MRE went into special issue starting in 1981 and standard issue in 1986, using a limited menu of twelve entrées.[6]