*These boots are NOT included in free shipping. Once you have ordered these boots you will receive an invoice for the shipping charge.

Bunny boots or Mickey Mouse boots (depending on the version) are the most common nicknames for the Extreme Cold Vapor Barrier Boots (Types I and II) used by the United States Armed Forces.

These waterproof rubber boots can be worn in extremely cold weather, −20 to −60 °F (−29 to −51 °C), with the liner-free interior retaining warmth by sandwiching up to one inch of wool and felt insulation between two vacuum-tight layers of rubber; this vacuum layer insulates the wearer's feet similar to a vacuum flask. These boots were originally developed at the Navy Clothing and Textile Research Center in Natick, Massachusetts, for use during the Korean War. 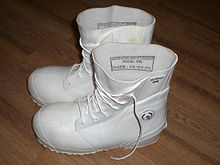 Originally designed during the Korean War for military expeditions in extremely cold weather (presently defined by the National Weather Service as −35 °F (−37 °C)), the ECVB Boots are rated to either -20°F to -60°F (depending on the type) and have been sold to civilians in large amounts as military surplus.

The white "Bunny boot" is an improved version of the Type I "Mickey Mouse boot", designed for use in even more extreme cold weather, and is rated all the way down to −65 °F (−54 °C). Given the sufferings of the soldiers fighting in the Battle of Chosin Reservoir in Korea, inducing many cases of frostbite, even with Type I boots, the Type II was created to encompass the "worst case scenario" need to field soldiers in the coldest conditions in which any military force could reasonably attempt to conduct operations (including Alaska, Siberia and both Arctic poles). For comparison, the average winter temperature at the South Pole in Antarctica is roughly −56 °F (−49 °C). The boot is slightly bigger and heavier (~8 oz. (0.22 kg) more per boot) than the black Type I because of the extra insulation.

Both Mickey Mouse boots and bunny boots have an air valve on each of the boots. These air valves must be opened prior to flying to ensure that the air pressure differential between the walls of the boot and the outside air does not cause the boots to rupture.

The extreme cold weather boot is nicknamed after the snowshoe hare, which is commonly found near Fort Greely, Alaska. During the fall the rabbits' fur changes color from brown to white, allowing it to blend in with its winter surroundings. As winter gets closer, more and more rabbits appear with their new white "boots".[3] These boots are manufactured by several companies including Bata, Acton and Air Boss.

Both Mickey Mouse boots and bunny boots have rubber wedges on the front of the toe and the back of the heel. These wedges lock into military-standard ski and snowshoe bindings.

Change socks daily - Due to the dual layer of insulation and moisture's inability to escape the inner shell of the boot, sweat can present a threat to comfort. It is recommended that wool socks are worn with these boots and changed at least daily.

Do not play with the air valve - If your Mickey Mouse boots have the air valve, do not open this valve unless airborne and do not blow into this valve. Getting any type of moisture in the insulation layer can cause it to be ineffective in keeping your feet warm and dry.